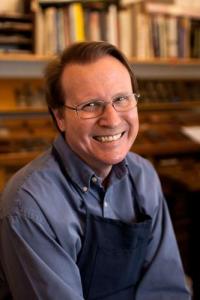 Gary Young’s honors include the Shelley Memorial Award from the Poetry Society of American, grants from the National Endowment for the Humanities, the Vogelstein Foundation, the California Arts Council, and two fellowship grants from the National Endowment for the Arts. He has received a Pushcart Prize, and his book of poems, The Dream of a Moral Life, won the James D. Phelan Award. He is the author of several other collections of poetry including Hands, Days, Braver Deeds (winner the Peregrine Smith Poetry Prize), No Other Life (winner of the William Carlos Williams Award of the Poetry Society of America), and most recently, Pleasure. His New and Selected Poems is forthcoming from White Pine Press. He is the co-editor of The Geography of Home: California’s Poetry of Place, and Bear Flag Republic: Prose Poems and Poetics from California. He has produced a series of artist’s books, most notably Nine Days: New York, A Throw of the Dice and My Place Here Below. Since 1975 he has designed, illustrated, and printed limited edition books and broadsides at his Greenhouse Review Press. His print work is represented in numerous collections including the Museum of Modern Art, the Victoria and Albert Museum, The Getty Center for the Arts, and special collection libraries throughout the country. He teaches at the University of California, Santa Cruz, and lives in the mountains north of Santa Cruz with his wife and two sons. He was recently named the Poet Laureate of Santa Cruz County.

Peter Everwine is poet’s poet, the kind of writer other poets read with equal parts of envy, gratitude and joy. If he were a baseball player, we would say that he has ‘soft hands’—nothing gets past him. Everwine’s poems are crystalline, pared down to essentials; they are heartrending, and they are beautiful. -Gary Young